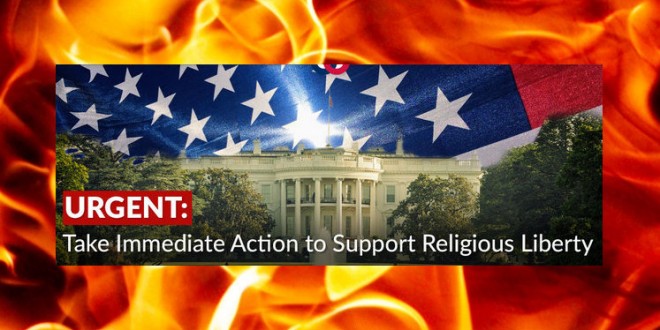 President Trump has been considering an Executive Order to protect religious liberty, but someone intentionally leaked it to the gay media in an attempt to derail it, allowing LGBT activists to orchestrate a false campaign claiming that protecting religious liberty is discrimination against gays and lesbians. The LGBT extremists are orchestrating a fearmongering campaign, getting their allies to contact the White House to oppose the prospective order.

Our opponents are working overtime to manipulate the media and their members into believing that protecting religious liberty is tantamount to LGBT discrimination, a false and despicable charge. They are inundating the White House with cotacts. Sadly, the Trump administration is not immune to this type of pressure, which makes it imperative that every NOM member act today to fight back.

President Trump clearly has an aversion to getting into a policy dispute with LGBT activists. A few months ago he wrongly said that the Supreme Court’s illegitimate ruling redefining marriage was “settled law.” The other day he announced that he was keeping an Obama administration executive order that gives special legal protections on “sexual orientation” and “gender identity” to LGBT citizens, subjecting people of faith to unjust claims of “discrimination.” We agree with the US Conference of Catholic Bishops which has called the decision “troubling and disappointing” because the Obama policy creates new forms of discrimination against people of faith.

NOM will praise President Trump when warranted, such as in his nomination of Judge Neil Gorsuch to the US Supreme Court, and will criticize him when warranted. We call on him to keep his campaign pledge to protect people of faith by signing the leaked Executive Order on religious liberty, and to rescind the flawed Obama-era order that gives special rights to the LGBT community. Previous Tony Perkins: Pray That God Will Prevent The Senate From Being Tough On Trump’s SCOTUS Nominee
Next GOP-Dominated US House Repeals Law Banning Sale Of Guns To Those With Severe Mental Illnesses