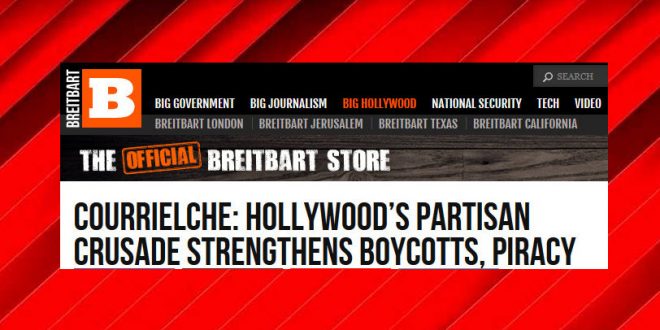 Breitbart Warns Hollywood: Get In Line Behind Trump Or We’ll Launch Campaign To Steal All Your Movies

Breitbart yesterday warned Hollywood’s celebrities that unless they get in line behind Trump, a concerted campaign to steal their movies will be launched. They write:

These condescending lectures have also helped spark another, more nefarious behavior…theft. Evidence of this practice can be seen anecdotally in the comment threads of conservative entertainment media. But data also shows new genres of piracy taking hold. A 2016 report, written by this writer, revealed a renaissance in “stream ripping” – software that allows users to rip audio from streaming music videos. Thirty percent of Internet users report using stream ripping – an unauthorized downloading behavior riling an industry that has suffered a 60% revenue decline from its 2000 high.

A similar software is impacting Tinseltown – a peer-to-peer file-sharing protocol called BitTorrent, with the most popular app being Popcorn Time. This software allows users to access newly released films and TV shows with a library that far exceeds any subscription streaming service, and at a much cheaper price…namely, zero. The eloquent user interface rivals Netflix, and is sending shudders down the spine of film underwriters. In 2015, the app was reportedly being downloaded an astonishing 100,000 times per day. And remarkably, Popcorn Time has persistently evaded anti-piracy efforts.

So before breaking ground on these new political endeavors, Hollywood should rethink its political posturing. The industry is teetering towards a boycott by an enormous, fully engaged segment of the population that clearly has other options. As the music industry has shown, long-term behavior can forever change. And if this past election cycle has revealed anything, it’s that Tinseltown no longer holds a monopoly on shaping cultural mores. So why risk it with political lectures?