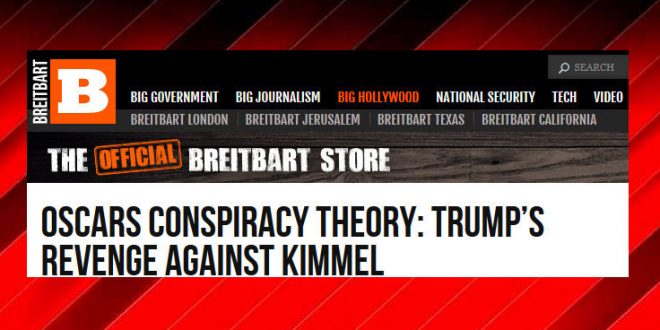 Breitbart: Maybe Trump Was Behind That Oscars Flub

Citing what was obviously a joke by an obscure entertainment writer, Breitbart is just asking the question, people. They write:

A new conspiracy theory about Sunday night’s disastrous ending at the Oscars is making the rounds in Hollywood, according to a report in the East Bay Times: President Donald Trump sabotaged the “Best Picture” award as revenge against host Jimmy Kimmel for mocking him.

The Times‘s Chuck Barney writes: “Did presenters Warren Beatty and Faye Dunaway blow it big time? Was this the revenge of Steve Harvey? Or did the White House play a role — seeking retaliation for all those zingers Kimmel tossed President Trump’s way?”

No, Breitbart, your insane theory is not “making the rounds in Hollywood.” Everybody knows exactly what happened.