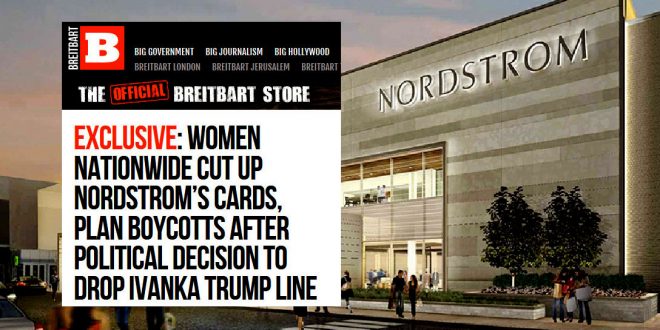 From the top story on Breitbart this afternoon:

Retail department store Nordstrom’s decision last week to cut first daughter Ivanka Trump’s fashion line has sparked a tremendous backlash from consumers—especially women—who say the company’s move has led them to boycott the store and cut up their Nordstrom’s cards.

Nordstrom’s claimed that the Ivanka Trump brand wasn’t performing well, but industry insiders tell Breitbart News that’s just not accurate. Nordstrom’s decision to mislead the public on why they are stopping carrying the Ivanka Trump brand is part of the fury out there among its longtime customers, who tell Breitbart News they’re cutting up their Nordstrom’s cards and won’t shop at the store anymore. Some even say they plan to return all their recent purchases.

And it’s not just women boycotting Nordstrom’s now: Brad Botwin, a previous shopper at the department store chain who is from Rockville, Maryland, told Breitbart News he’s done with them too.

“I am a long time Nordstrom customer and exclusively purchase my suits, shirts and ties at Nordstrom,” Botwin said in an email. “No longer because of their punitive and political act to drop Ivanka Trump’s clothing line. I have also e-mailed Nordstrom to drop me from their special email list of events and other messages. If this organization doesn’t have the backbone to stand up to the unfair left wing pressure against Ivanka Trump, I shudder to think what next they will cave on next. Decisions like this erode the freedoms and liberty of all Americans.”

Breitbart has already promoted boycotts of Macy’s, Target, Starbucks, Kellogg’s, and many other companies that don’t appear to wholeheartedly support the right wing.