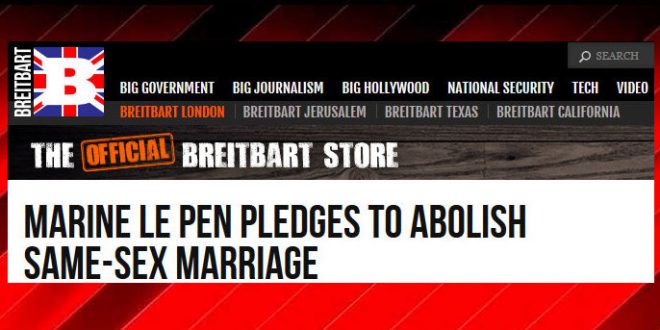 It’s worth taking note of this as Breitbart is the de facto voice of White House advisor Steve Bannon. They write:

As part of her 144 pledges to the French people, anti-mass migration Front National presidential candidate Marine Le Pen has said she will abandon gay marriages in favour of civil partnerships.

Earlier this month after holding her campaign launch in Lyon, Ms Le Pen talked about her 144 pledges to the French people, many of which are against globalism and the power of the European Union. Pledge number 87 speaks to her conservative supporters and rejects the idea of gay marriage which has been legal in France since 2013, but would allow for civil partnerships, law firm Marilyn Stowe claims.

Ms Le Pen currently leads in the polls for the first round of the presidential election and is expected to face centre-left Emmanuel Macron, who is running as an independent candidate, in the second round. Mr Macron has also touched on the subject of gay marriage, infuriating his left wing supporters by saying that right-wing supporters had been “humiliated” and stigmatised by the 2013 gay marriage legislation.

If Milo disappears from their site, expect Breitbart to become even more virulently anti-LGBT.