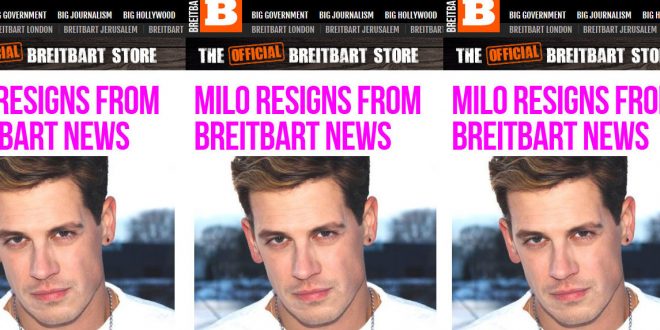 Breitbart Finally Breaks Silence On Milo, Announces Resignation But Does Not Say What Caused It

After two days of burying stories about the unfolding Milo scandal by blocking them from site searches, Breitbart has finally posted a report. Oh, but something is missing here. They write:

Milo Yiannopoulos announced at a Tuesday New York City press conference his decision to resign as Breitbart Tech editor. “Breitbart News has stood by me when others caved,” said Yiannopoulos. “They have allowed me to carry conservative and libertarian ideas to communities that would otherwise never have heard them. They have been a significant factor in my success. I’m grateful for that freedom and for the friendships I forged there.”

Milo continued: “I would be wrong to allow my poor choice of words to detract from my colleagues’ important reporting, so today I am resigning from Breitbart, effective immediately. This decision is mine alone.” Yiannopoulos added: “When your friends have done right by you, you do right by them. For me, now, that means stepping aside so my colleagues at Breitbart can get back to the great work they do.”

A Breitbart News company statement released after the press conference stated: “Milo Yiannopoulos’s bold voice has sparked much-needed debate on important cultural topics confronting universities, the LGBTQ community, the press, and the tech industry. Milo notified us this morning of his decision to resign as editor of Breitbart Tech and we accepted his resignation.”

The comments there are REALLY something, even by Breitbart‘s cesspoolian standards.