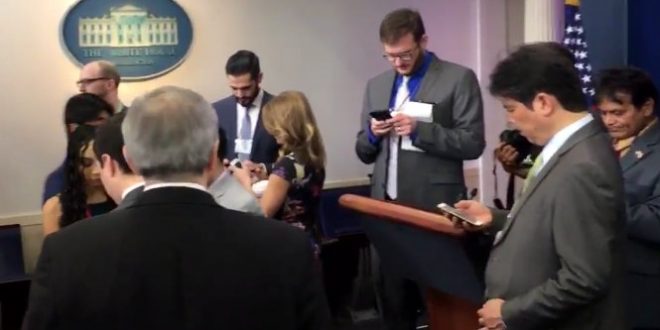 Multiple news outlets are reporting on Twitter that the White House has blocked them from entering today’s press gaggle with Sean Spicer. Among those reportedly locked out are CNN, the New York Times, Politico, Buzzfeed, and others. Earlier today Trump doubled down on his attack on the “fake news” media during his CPAC speech, again calling them “the enemy of the people.” Story developing….

UPDATE: From the Daily Beast.

Journalists expressed outrage at the unusual move, and the Associated Press and Time magazine boycotted the briefing as a result. Spicer reportedly allowed sympathetic outlets into the gaggle—an informal question-and-answer session between a press secretary and journalists—including the Washington Times, Breitbart, and One America News Network. Jeff Mason, the president of the White House Correspondents’ Association, said in a statement that the consortium of reporters will “strongly protest” the move and further discuss it with White House press staffers.

Just in: @CNN @nytimes @Politico & others blocked from attending White House gaggle with @PressSec. WH has so far offered no explanation