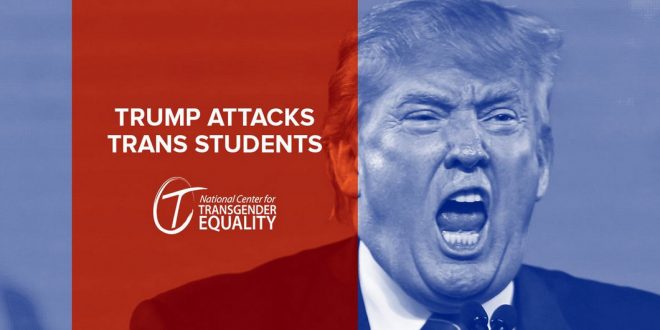 President Trump rescinded protections for transgender students that had allowed them to use bathrooms of their gender identity, overruling his own education secretary and placing his administration firmly in the middle of the culture wars that many Republicans have tried to leave behind. In a joint letter, the top civil rights officials from the Justice Department and the Department of Education rejected the Obama administration’s position that nondiscrimination laws require schools to allow transgender students to use the bathrooms of their choice.

That directive, they said, was improperly and arbitrarily devised, “without due regard for the primary role of the states and local school districts in establishing educational policy.” Ms. DeVos’s unease with the situation was evident in the strongly worded statement she released Wednesday night that said she considered it a “moral obligation” for every school in America to protect all students from discrimination, bullying and harassment.

She said she had directed the Education Department’s Office for Civil Rights to investigate all such claims “against those who are most vulnerable in our schools” but also insisted that bathroom access was not a federal matter. “This is an issue best solved at the state and local level,” Ms. DeVos said. “Schools, communities, and families can find – and in many cases have found – solutions that protect all students.”

“We all know that Donald Trump is a bully, but his attack on transgender children today is a new low. The U.S. Department of Education’s decision to withdraw guidance clarifying the rights of transgender students endangers the well-being and safety of children across the country.

“Trump’s actions do not change the law itself—transgender students remain protected by Title IX of the Education Amendments of 1972—but abandoning the guidance intentionally creates confusion about what federal law requires. The law bars discrimination – the new administration invites it.

“Betsy DeVos became Education Secretary just one week ago. At her brief confirmation hearing she publicly committed to protecting LGBT students – this harms them.

“Over the past week Donald Trump has attacked perhaps the two most vulnerable groups of children in America: transgender children and refugee children. While his Education Secretary was busy withdrawing protective guidance for trans kids, his Homeland Security Secretary signed memos that strip legal protections from children who arrive alone at our borders, seeking refuge.

“Now Attorney General Jeff Sessions and Secretary DeVos give us sickening echoes of the racially segregated schools era by claiming that enforcement of this federal civil rights law is a ‘states’ rights issue.’ This is not just a bizarre misunderstanding. We recognize that language.  This is a cynical rejection of the federal government’s responsibility to enforce federal law protections for vulnerable students.

“While the Trump/Pence administration wages its War on Children, Lambda Legal will redouble our efforts to protect transgender and other vulnerable kids. At Lambda Legal, we are already in court fighting for transgender students, and we are prepared to sue any school district that discriminates in the wake of the Trump administration’s actions today.”

“PFLAG hearts everywhere are with the worried parents who will be kept awake tonight, and the kids who will be scared to go to school in the morning.  Tomorrow we will fight even harder for the protections that Title IX still affords all transgender youth across the country.”

“Supports for transgender students in K-12 schools change and save lives, and hurt no one. President Trump’s reversal of federal guidance affirming Title IX protections in schools undermines the settled expectations and protections afforded by federal law, hurts transgender students and impedes the progress we have made creating safer and more inclusive learning environments for all.

“While the Trump administration may abandon transgender students, GLSEN won’t. And neither will the thousands of teachers, administrators and parents around the country who work with GLSEN and our local Chapters to ensure that transgender students everywhere have the opportunity to simply be themselves and live better lives. Schools, leaders and teachers must do the right thing and give all students the chance in life they deserve.

“The administration’s actions today do not and cannot change the well-established legal foundations upon which the federal Title IX guidance is based. Many federal courts have already determined that Title IX’s prohibition on sex discrimination and the Constitution’s guarantee of equal protection extend to transgender individuals. Fairly applied, the law remains on our side.”

“The Trump administration today showed a few more of its true colors, and they are decidedly not the colors of the rainbow. By rescinding federal guidance from the Departments of Justice and Education that helped to ensure equal educational opportunities for transgender students, the administration has contributed to the baseless hysteria and panic that puts so many vulnerable transgender youth at risk.

“But we don’t need Jeff Sessions or Betsy DeVos to tell us whether these young people deserve protection. We know that they deserve protection, as well as equality and respect, and we know that Title IX and the U.S. Constitution demand it. We will continue to fight for transgender students in classrooms and school board meetings and courtrooms throughout the country, and we will prevail.”

We want trans students across the country and their parents to know the law is on your side and we at the ACLU won't stop fighting for you.