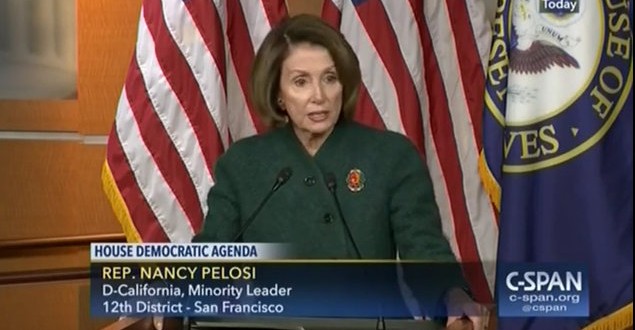 House Minority Leader Nancy Pelosi (D-Calif.) slammed Stephen Bannon on Thursday, saying President Trump’s senior adviser is a racist who has no business sitting on the National Security Council (NSC). “It’s a stunning thing that a white supremacist, Bannon, would be a permanent member of the National Security Council,” Pelosi told reporters in the Capitol. Bannon, a former executive with Breitbart News, is a senior adviser to the president.

“What’s making America less safe is to have a white supremacist named to the National Security Council as a permanent member while the chairman of the joint chiefs and the director of national intelligence are told, ‘Don’t call us, we’ll call you. You’re no longer permanent members,’” Pelosi said. In November, just after the election, Pelosi huddled with then-Vice President-elect Mike Pence in her Capitol office, where she urged him to try to convince Trump to drop Bannon as a top advisor. At the time, she characterized Bannon as a white nationalist.

Previous Treasury Department Exempts Russian Espionage Agency From Sanctions Imposed Over Election Hacking
Next Spicer On Anti-LGBT Order: “Ideas Are Being Floated” But The Pendulum Is Swinging To “Religious Liberty”