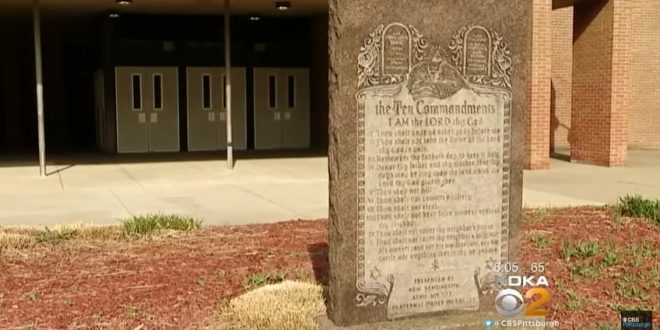 A Pennsylvania school district has agreed to remove a granite Ten Commandments monument from outside a high school and pay $164,000 in legal fees to settle a federal lawsuit. The Freedom From Religion Foundation said it received a signed settlement Tuesday from the New Kensington-Arnold School District saying it will relocate the 6-foot-high monolith from near the gym entrance at Valley High School within 30 days.

“We’re very glad it’s over with, but honestly, it shouldn’t have been fought in the first place,” said Annie Laurie Gaylor, co-president of the foundation. The district’s lawyer declined to comment, and the man who signed the release last week, Superintendent John Pallone, did not return messages. The school is in New Kensington, about 20 miles northeast of downtown Pittsburgh. The challenge to the monument was filed in 2012 by a student and her atheist mother, Marie Schaub. The girl encountered the monument as she attended recreational events or dropped off her sister, a Valley High student at the time.

In the second clip below, Pittsburgh’s NBC affiliate reports that the mother has received death threats such as “you should be dragged through the streets and shot.”