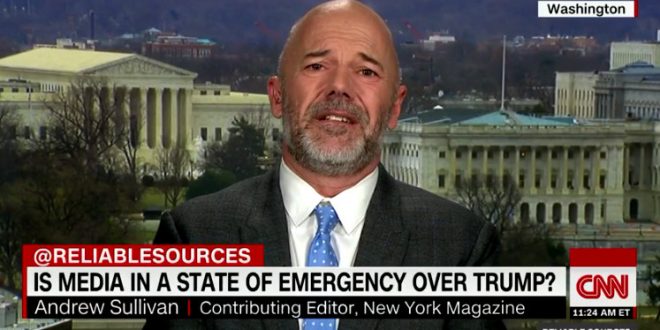 Andrew Sullivan says it’s time for journalists to talk publicly about President Trump’s “mental stability.” “To have such an unstable figure, incapable of accepting reality, at the center of the world, is an extremely dangerous thing,” Sullivan said in an interview for Sunday’s “Reliable Sources” on CNN. Sullivan’s view is that the president is exhibiting “bonkers” behavior — and that if they tip toe around it, journalists are doing the public a disservice.

Sullivan, a pioneering blogger who is now a contributing editor to New York magazine, recently started what he’s calling a “weekly diary.” His first entry addressed what he called “the obvious question of the president’s mental and psychological health.” “I know we’re not supposed to bring this up — but it is staring us brutally in the face,” Sullivan wrote.

He defended his scrutiny of Trump’s mental health by saying he is not a shrink, “but I am a human being and I can tell if someone is saying things that we know not to be true and never corrects it.” He cited the president’s false depiction of the U.S. murder rate and bogus claims about widespread voter fraud.