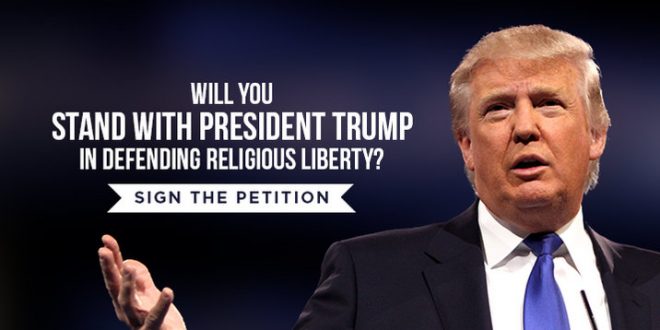 We have to act now! Liberals and homosexual activists are advancing their radical agenda by attempting to torpedo President Donald Trump’s executive order on religious liberty that was recently leaked to the media. This is an excellent executive order that will protect your First Amendment rights.

I urge you to sign the AFA petition NOW asking President Trump to protect religious freedom for all Americans. I plan to personally deliver this petition with signatures during a meeting with the Trump Administration. Help me take your voice to the White House!

This is urgent! After the executive order was leaked, radical activists demanded that the White House keep in place the policy implemented by President Obama’s executive order. The Obama policy bans federal contractors from funding if they refuse to change their non-discrimination policies to include homosexuals and “transgender” persons.

If Christians remain silent and do not let President Trump know they stand with him on religious liberty, then the only voices he will hear are those of radical homosexual activists. Why should we stand with President Trump and sign the petition?

First, the executive order that was leaked represents excellent public policy that would accomplish several good things. Second, President Trump campaigned on the promise to protect and preserve our religious liberty, which was undermined by the Obama Administration. Third, Mr. Trump has given strong indications he will keep his word by having already signed an executive order banning federal funding of Planned Parenthood International and nominated a conservative, constitutional judge to the Supreme Court.

If President Trump signs this executive order, then it will be a clear indication that he was sincere when he said at the National Prayer Breakfast, “my administration will do everything in its power to defend and protect religious liberty.”