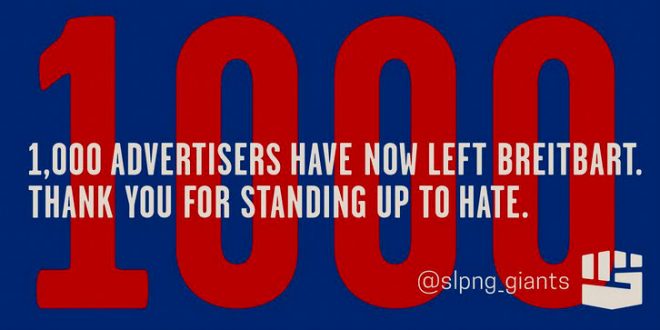 1000+ Companies Block Their Ads From Breitbart

More than 1,000 advertisers have pulled out of advertising with far-right news outlet Breitbart, a campaign group has claimed. Kelloggs, BMW, Visa, T-Mobile, Nordstrom and Lufthansa have all severed ties with the company over the last few months, according to a database from Sleeping Giants.

A petition for Amazon to cancel its relationship with the website has also reached almost half-a-million signatures. A total of 1,132 companies have so far pledged to remove the ultra-conservative site from their media plan, Sleeping Giants said.

Emma Pullman, lead campaign strategist at separate campaign group SumOfUs, told The Independent that most of the companies were pre-existing advertisers. Some had put the website on their black list after accusations it writes misogynist and racist articles, she added. “We are reaching fever pitch,” she said.

To be clear, many of these companies, probably a large majority, had no direct advertising deals with Breitbart. Instead, their now-blocked ads appeared via third party digital ad agencies based on the site’s content and by the readers’ recent browsing history. (Tipped by JMG reader Daddy Ray)

Congratulations, you all. You're doing good work here. pic.twitter.com/w807dFH2nY