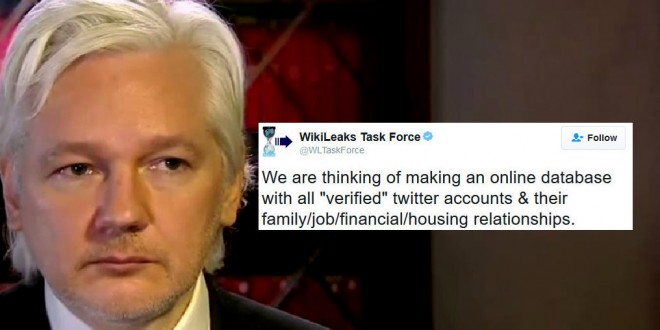 The tech world is rightfully freaking out. Via Ars Technica:

A Friday Twitter post from Wikileaks’ official “task force” declared intent to build a publicly searchable database revolving around a particular group of people: verified Twitter accounts. The task force neither clarified where this information would come from, nor did it clarify its reasons for mulling such a project.

On that same day, the task force’s feed repeatedly replied to and quoted posts from verified members of the media. These posts accuse specific journalists and broader media outlets of lying and committing libel, particularly in their reports on alleged hacking perpetrated against the US government.

The task force’s posts include repeated use of the phrase, “cease and desist or face the consequences.” The account also posted a call to its “troops” and asked them to “find falsehoods pushed by journos/politicians” and “correct them.” The task force included a search link for any posts by verified accounts with the words “Wikileaks” or “Assange.”

Such a database, distributed specifically to users known as “troops,” would likely be used for doxing—as in, the combined gathering and publishing of personal information with intent to exploit that information for the sake of harassment or abuse.

You know Trump’s army of trolls are all salivating at the prospect.

We are thinking of making an online database with all “verified” twitter accounts & their family/job/financial/housing relationships.

Should be easy since we all live in our mother’s basements. https://t.co/THrwlWC83F — JoeMyGod (@JoeMyGod) January 6, 2017