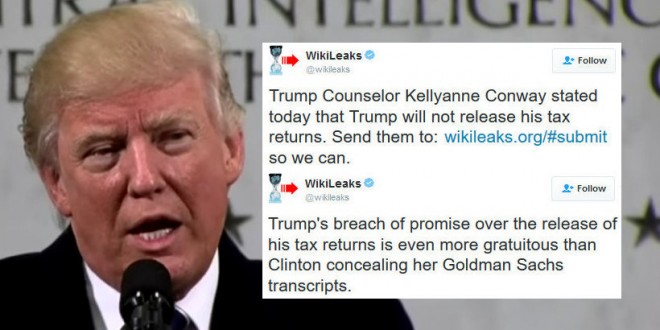 This morning Kellyanne Conway flatly declared that contrary to his many, many promises to do so, Donald Trump will never release his tax returns. Conway added, “The people voted for him, they just don’t care.”

Wikileaks immediately responded, calling Trump’s “breach of promise” worse than Hillary Clinton’s refusal to release the transcripts of her speeches to Goldman Sachs, and offering to publish Trump’s returns should anybody provide them.

Quite the interesting turn.

Trump Counselor Kellyanne Conway stated today that Trump will not release his tax returns. Send them to: https://t.co/cLRcuIiQXz so we can.

Trump's breach of promise over the release of his tax returns is even more gratuitous than Clinton concealing her Goldman Sachs transcripts.

Previous Conway: Trump Will Never Release His Tax Returns, People Voted For Him And They Just Don’t Care [VIDEO]
Next Merriam-Webster Trolls Conway On “Alternative Facts”