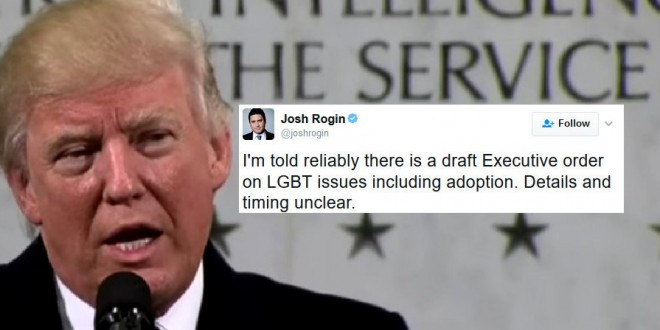 This afternoon White House Press Secretary Sean Spicer dodged a direct question about a rumored anti-LGBT executive order. An hour after his press briefing concluded, Washington Post reporter Josh Rogin tweeted that a “draft” version of such an order does exist and targets adoption rights among other issues.

Trump supporters are responding to Rogin on Twitter, accusing him of “needlessly spreading hysteria” among other similar claims. The Log Cabin Republicans have yet to publicly react. At this writing the most recent tweet on their feed declares that “The GOP is focused on being more inclusive.”

I’m told reliably there is a draft Executive order on LGBT issues including adoption. Details and timing unclear.

Log Cabin Republicans National Board of Directors member @daninnis: “The GOP is focused on being more inclusive” https://t.co/wW5Yaiw1Ct