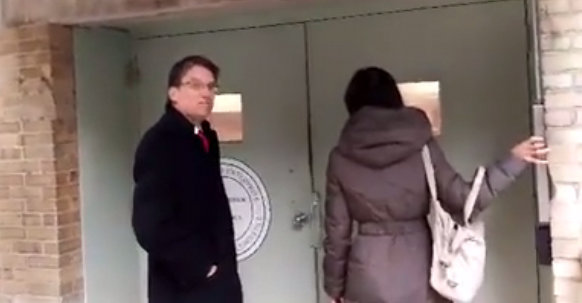 Former North Carolina governor Pat McCrory is not too popular in his home state these days, after costing the state millions of dollars and hundreds of jobs due to boycotts over the anti-LGBTQ law he signed while in office. Turns out McCrory is unpopular outside of his state as well, as a video posted Facebook user Udai Basavaraj shows. The video, tagged as being at the Capitol Hilton, accompanied by conservative pundit Lou Dobbs, finds the former governor doing his best to avoid a group of people shouting, “Shame!” and calling him an antigay bigot.

Police arrived eventually to shoo away the protesters. This afternoon McCrory’s spokesman sent a statement to the Charlotte Observer:

“It’s regrettable that up to a few dozen protesters decided to stalk and shout insults at the governor and police when we should all be listening to each other and coming together as a country in a respectful manner. Governor McCrory is thankful to Lou Dobbs for helping during this incident, and very thankful to the D.C. police for keeping everyone safe during a very successful inaugural weekend.”