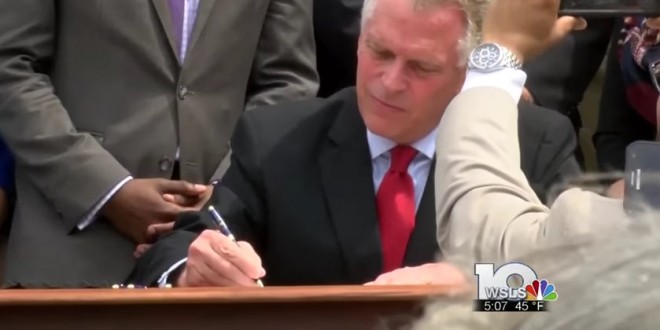 Virginia Gov. Terry McAuliffe on Thursday signed an executive order that bans anti-LGBT discrimination among state employees, contractors and subcontractors. “Today’s executive order is a huge leap forward in our goal toward becoming a state that is a safe, welcoming and equal place for all Virginians,” said Equality Virginia Executive Director James Parrish in a press release. “We are grateful for the continued leadership demonstrated by Gov. McAuliffe on gay and transgender issues.”

“This policy is simply good business practice — taxpayers should expect that their money will not be used to support organizations that discriminate,” he added. The first executive order that McAuliffe issued upon taking office in 2014 banned discrimination against LGBT state employees. Virginia’s statewide anti-discrimination law does not include sexual orientation and gender identity.

And from the Roanoke Times:

Gov. Terry McAuliffe vowed Wednesday to veto any legislation he receives from Virginia lawmakers similar to North Carolina’s controversial “bathroom bill.” His statement comes one day after Del. Bob Marshall, R-Prince William, prefiled the Physical Privacy Act. The bill stipulates people must use the restroom, locker room or changing room that corresponds to the gender assigned at birth as opposed to the gender with which they identify. The measure would apply to restrooms located in public schools, universities and government buildings.

Asked about the proposal after an unrelated event Wednesday at Virginia Tech, McAuliffe said he would strike down all legislation that inhibits anyone’s individual rights. “Stay away from the socially divisive issues,” he said to legislators. “We are not going to put a wall up around Virginia.” Marshall said he doesn’t introduce legislation based what McAuliffe likes and doesn’t like. Virginia would be lucky to be as business-friendly and collect as much tax revenue as its neighbor to the south, Marshall said.

Gov: “I will veto any bill that legalizes discrimination or harms our on-going efforts to bring jobs to Virginia” https://t.co/9Rnn6qHPD4