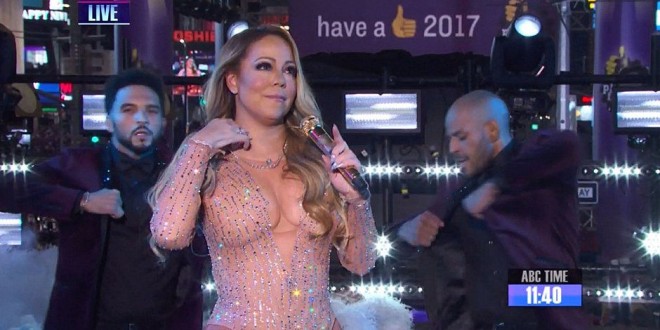 Mariah Carey didn’t sing throughout most of her performance on Dick Clark’s New Year’s Rockin’ Eve with Ryan Seacrest, explaining that she couldn’t hear the music. As the last pre-midnight performer on the ABC special, Carey took the stage in New York City’s Times Square to sing a medley of hits. But seconds into her performance of “Auld Lang Syne,” it became clear that Carey’s lips were not in sync with the vocals heard on the live broadcast.

The singer addressed the issue after transitioning to her hit “Emotions” and removing her earpiece, which a backup dancer tucked behind her shoulder. “Well, happy New Year! We can’t hear, but I’ll just get through the moment, okay,” she said. “I feel,” Carey sang before pausing and looking down to possibly search for the earpiece (a motion she repeated at multiple points).

“All right,” said Carey, strutting across the stage. “We didn’t have a [sound] check for this song, so we’ll just say it went to No. 1, and that’s what it is. Okay.” Once again, Carey blamed the issue on not being able to hear the music. “Put these monitors on, please,” she said, pleading with the production crew.