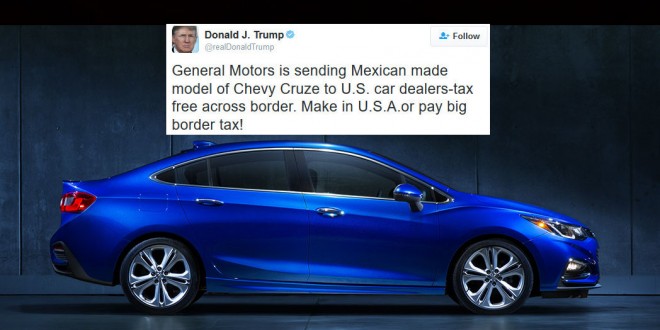 General Motors is the latest target of President-elect Donald Trump’s Twitter cannon, with the Manhattan billionaire complaining that the American automaker is manufacturing cars in Mexico and importing them into the U.S. without penalty. “General Motors is sending Mexican made model of Chevy Cruze to U.S. car dealers-tax free across border. Make in U.S.A. or pay big border tax!” Trump wrote on Twitter Tuesday morning.

The president-elect promised throughout the campaign to punish American companies that move jobs abroad by slapping them with a 35 percent tax on imported goods. He also railed against free trade agreements and was especially critical of NAFTA, which he said allowed companies to easily move jobs from the U.S. to Mexico. He would regularly claim in stump speeches that an unnamed factory-building friend of his referred to manufacturing in Mexico as “the eighth wonder of the world.”