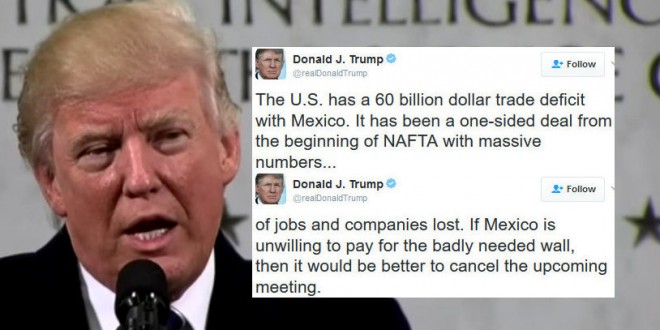 President Trump on Thursday said it may be better to cancel his upcoming meeting with Mexican President Enrique Peña Nieto if Mexico refuses to pay for a wall along the U.S.-Mexico border. The president on Wednesday signed an executive order that directs federal agencies to begin constructing a wall on the U.S.-Mexico border, his central campaign promise.

In the wake of the executive order, reports surfaced that Peña Nieto may scrap his planned Jan. 31 meeting with the president. The Associated Press confirmed with a Mexican official that the Mexican president is “considering” canceling the meeting.

In an interview Wednesday on ABC News, the president said that U.S. funds are necessary for beginning the construction of the wall. “I’m just telling you there will be a payment,” he said. “As soon as we can. As soon as we can physically do it.”

The U.S. has a 60 billion dollar trade deficit with Mexico. It has been a one-sided deal from the beginning of NAFTA with massive numbers…

of jobs and companies lost. If Mexico is unwilling to pay for the badly needed wall, then it would be better to cancel the upcoming meeting.

If I'm not mistaken, this is straight from the "you can't break up with me bc I was already breaking up with YOU" manual of int'l diplomacy https://t.co/fLCk7WDb5R