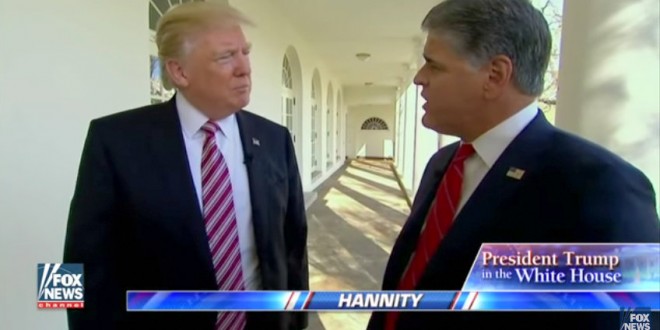 Waterboarding doesn’t constitute torture, President Trump said Thursday, reiterating his past arguments that it is an effective way to gather intelligence.

“I mean, torture is real torture, OK? Waterboarding is – I’m sure it’s not pleasant, but waterboarding was just short of torture,” he said in an interview with Fox News’ Sean Hannity. “When – you know, all of a sudden, they made it torture.”

“I spoke with people the other day who are in this world that were talking about it. Absolutely, it works. Absolutely,” he said.

The two men continue to discuss the merits of waterboarding, as they saw it. Trump began to complain about how when “they go into a nightclub and they machine gun everybody down … they were not allowed to waterboard,” which, he said, “seems so foolish and so naive. But this is what we have to put up with. But, here’s the story –“

Suddenly, Hannity interrupted the president, pivoting back to [ABC reporter David] Muir who, to recap, had landed the first sit-down interview with the newly sworn-in President Trump. “I would ask David Muir, if they kidnapped your kid and you have one of the kidnappers, what would you do to get the location of your child?” Hannity said.

“Or, would you want him to talk in 48 hours from now, by being nice to him, OK?” Trump added, joining in on the ghoulish hypothetical.

Previous Washington Post: Trump Pressured Park Service Director To Back Up His Inauguration Attendance Claims
Next Man Behind Voter Fraud Claims: We Can Totally Prove It, We Just Need A Little More Time [VIDEO]