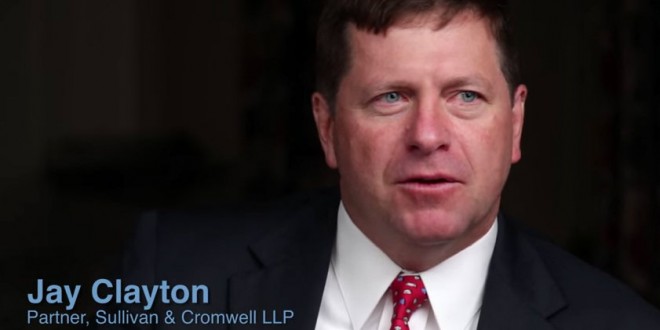 President-elect Donald J. Trump said on Wednesday that he planned to nominate Jay Clayton, a partner with the prominent New York law firm Sullivan & Cromwell, to lead the Securities and Exchange Commission, the latest appointment with strong ties to Wall Street.

If confirmed, Mr. Clayton will be responsible for “encouraging investment in American companies” and “providing strong oversight of Wall Street and related industries,” according to a statement by Mr. Trump’s communications office on Wednesday morning. “We will carefully monitor our financial sector, as we set policy that encourages American companies to do what they do best: create jobs,” Mr. Clayton said in the statement.

The role of the federal agency is to protect investors and enable companies to raise capital through the public markets in a way that fosters economic growth.

An adviser to Goldman Sachs, Mr. Clayton would join several Wall Street alumni in serving in Mr. Trump’s administration. Steven Mnuchin, a former Goldman Sachs trader who runs his own hedge fund and invested in Hollywood movies before leading fund-raising for Mr. Trump during the election, has been nominated to be Treasury secretary. Wilbur Ross, the billionaire investor, has been picked as the next commerce secretary, while Gary D. Cohn, who was No. 2 at Goldman Sachs, will be Mr. Trump’s economic top policy adviser.