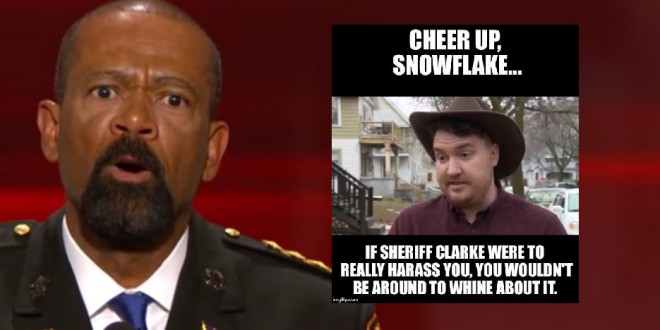 Trump surrogate and Milwaukee County Sheriff David Clarke has posted a second violent threat against the man he had detained at the airport for commenting about his outfit. The Milwaukee Journal Sentinel reports:

Milwaukee County Sheriff David A. Clarke Jr. isn’t backing away from his strong words for a Riverwest resident who filed a harassment complaint against the sheriff. Clarke is amping up the threats and rhetoric. On Wednesday, in response to a protest of his earlier remarks, Clarke’s office posted this on his county Facebook page:

“Sheriff Clarke regrets that he cannot attend this juvenile, leftist, anti-cop tantrum. He is pleased that he has their attention however. The Sheriff is in Washigton (sic) to witness the swearing in of our next President Donald J. Trump as we embark on a mission to MakeAmericaGreatAgain!”

The post included a meme taunting Dan Black, a 24-year-old resident who alleged that he was harassed by Clarke. Black claimed he was confronted, interviewed and then escorted out of Mitchell International Airport by a group of deputies after a brief exchange with Clarke on a flight from Dallas on Sunday.

Earlier this week, Clarke issued a statement saying Black and others like him may be “knocked out” if they hassle him on a plane: “The sheriff said he does not have to wait for some goof to assault him. He reserves the reasonable right to pre-empt a possible assault.”

Last night Clarke was a featured speaker at the “DeploraBall” as was James O’Keefe and assorted self-proclaimed Nazis. Later in the evening he was seen congratulating Trump at a separate event.

Clarke is currently under investigation by federal authorities after a mentally ill inmate at his jail died of thirst six days after water had been cut off to his cell. Several years ago, Clarke was successfully sued by two deputies for having been forced to endure Christian proselytizing by an evangelical group he regularly invited to mandatory staff meetings.

Previous White House Website Scrubbed Of LGBT Rights, Civil Rights, And Climate Change Moments After Swearing In
Next Pope Sends Message To Trump: I Pray That You’ll Be Guided By Ethical Values And Concern For The Poor