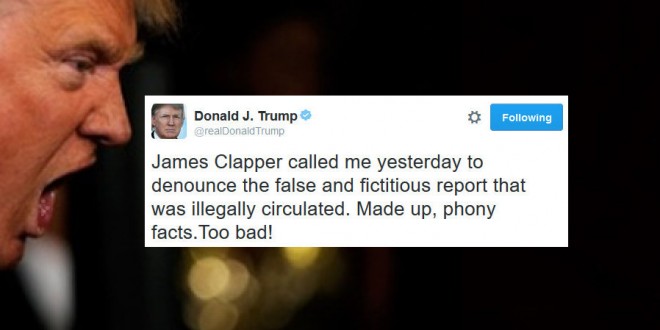 Trump Starts The Day With Yet Another Lie

This evening, I had the opportunity to speak with President-elect Donald Trump to discuss recent media reports about our briefing last Friday. I expressed my profound dismay at the leaks that have been appearing in the press, and we both agreed that they are extremely corrosive and damaging to our national security.

We also discussed the private security company document, which was widely circulated in recent months among the media, members of Congress and Congressional staff even before the IC became aware of it. I emphasized that this document is not a U.S. Intelligence Community product and that I do not believe the leaks came from within the IC. The IC has not made any judgment that the information in this document is reliable, and we did not rely upon it in any way for our conclusions. However, part of our obligation is to ensure that policymakers are provided with the fullest possible picture of any matters that might affect national security.

President-elect Trump again affirmed his appreciation for all the men and women serving in the Intelligence Community, and I assured him that the IC stands ready to serve his Administration and the American people.

This will certainly end up in our weekly round-up of "What Trump got wrong on Twitter this week." Clapper's statement said the opposite. https://t.co/YWjLx8GQyg

This statement appears to confirm on record the CNN report on what took place last week. pic.twitter.com/S9Szott1ng

Previous Fox News Host Shep Smith Defends CNN: No Journalist Should Ever Be Belittled By The President [VIDEO]
Next Samantha Bee Goes To Town On #PissGate [VIDEO]