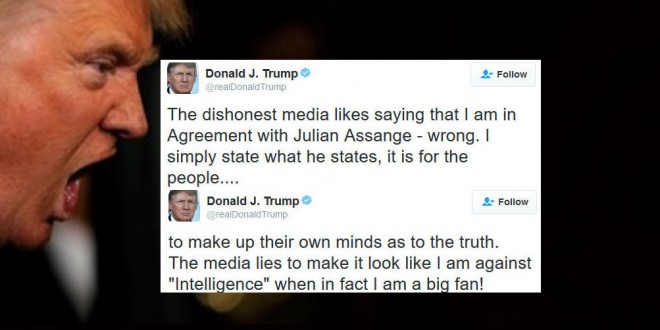 On Twitter Thursday, Donald Trump objected to news stories that have suggested he places a higher value on WikiLeaks founder Julian Assange’s statements than on the findings of the U.S. intelligence community. In the tweet that mentioned Assange Wednesday, Mr. Trump cited the WikiLeaks founder, who had claimed in an interview with Fox News that Russia was not the source of the hacked emails of the DNC or of Hillary Clinton’s campaign chairman, John Podesta.

The president-elect’s tweets Thursday morning came shortly before Director of National Intelligence James Clapper and NSA Director Adm. Mike Rogers were to testify before the Senate Armed Services Committee about Russian cyber attacks during the 2016 election, as well as the greater cyber threat Russia poses to the U.S.