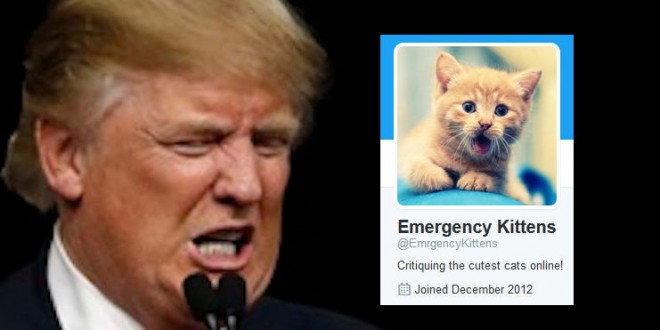 Donald Trump only follows family members, staffers, and his own business accounts on Twitter. Except for last night, when he briefly followed a popular account that exclusively posts images of adorable kittens. The New York Daily News reports:

Among the biggest names in right-wing politics Donald Trump is following on Twitter, the President-elect briefly picked an account dedicated to adorable felines to join his feed. The future commander-in-chief — often blasted for bizarro social media habits — followed @EmrgencyKittens while busy compiling his White House team and preparing for his inauguration. He later unfollowed the beloved account known for curating cute cat photos for nearly two million followers. The Twitter account did not follow Trump back as of late Sunday and did not immediately respond to a request for comment. After news of Trump’s follow broke, @EmergncyKittens posted an animated image of a kitten appearing to gasp. That tweet was later deleted and replaced with a jeering dispatch that Trump unfollowed it before the account’s mastermind could relay a joke over private message.