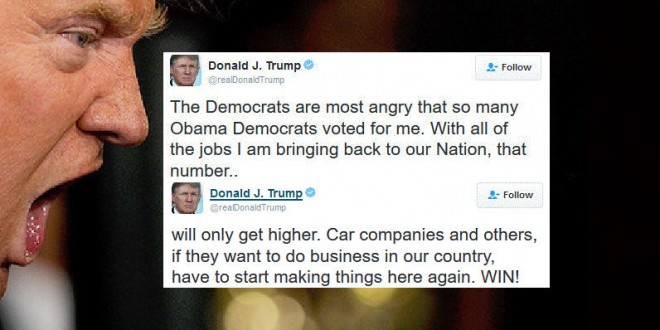 The Commander-in-Tweet ripped Democrats again Sunday for still being unable to accept that he won the election, promising that his support will only grow.

The President-elect has firmly reiterated that companies who keep their factories in the U.S. will be rewarded under his administration while those who outsource to foreign countries like Mexico will face steep fines.

He has already taken credit for saving thousands of jobs after at least two companies that have announced they will keep their operations in America. Both denied that Trump played a role in the decision.

Carrier, a manufacturer of air conditioners and furnaces, announced it would keep 1,100 jobs in Indiana instead of Mexico after it was promised $7 million in incentives from the state.

And shortly after, Ford Motor Co. ditched its plan for a Mexican car factory, instead adding 700 jobs to its Michigan plant. Trump’s battle with Democrats flared up Saturday when Georgia Rep.

The Democrats are most angry that so many Obama Democrats voted for me. With all of the jobs I am bringing back to our Nation, that number..

will only get higher. Car companies and others, if they want to do business in our country, have to start making things here again. WIN!