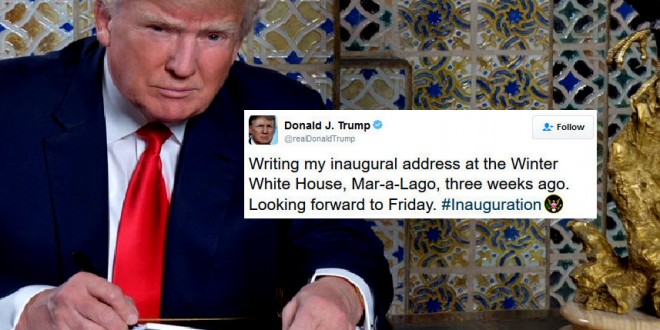 Trump: I Wrote Own My Inauguration Speech

President-elect Donald Trump has written his inauguration address draft himself, two senior Trump transition officials told CNN Tuesday. Last month, Trump told guests at his Mar-a-Lago estate in Florida, as well as presidential historian Douglas Brinkley, that he planned to write the speech himself. On Wednesday, Trump on social media shared an image of him writing what he said was his inaugural address at the estate last month. The decision is a departure from how Trump tackled speeches during the campaign, when he either delivered off-the-cuff remarks or relied on text prepared by his senior policy adviser, Stephen Miller.

I think the regular White House is still there in winter https://t.co/ijo6nA25WT

.@realDonaldTrump Oh, honey, this looks terribly staged. Is that a magic marker?

@realDonaldTrump Who is translating it from the original Russian for you?