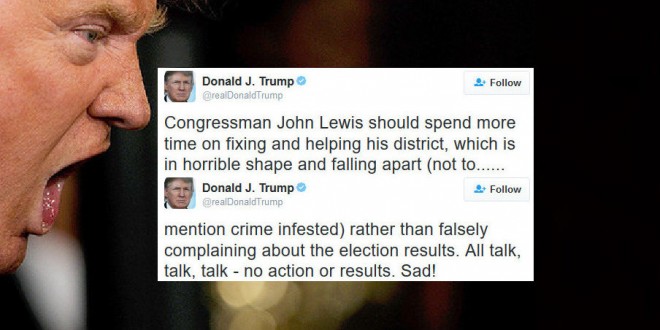 President-elect Donald Trump took to Twitter to bite back at an long-serving congressman refusing to attend the inauguration, calling the Civil Rights leader “sad” and “all talk” on the Martin Luther King Jr. Day holiday weekend.

“Congressman John Lewis should spend more time on fixing and helping his district, which is in horrible shape and falling apart (not to mention crime infested) rather than falsely complaining about the election results,” he tweeted just after 8 a.m. Saturday. “All talk, talk, talk — no action or results. Sad!” he added.

Lewis — a Democrat from Georgia who was brutally beaten during Civil Rights marches in the 1960s — announced Friday that he will not attend Trump’s inauguration, saying he doesn’t believe the President-elect is a genuine leader. “I don’t see this President-elect as a legitimate president,” he said on “Meet the Press,” citing allegations that Trump-favoring Russian operatives hacked the election.

Trump’s attack follows the formula of his previous response to slights on the campaign trail, including questioning Sen. John McCain’s war record. His choice of a target this time – the man who marched and was beaten in the “Bloody Sunday” march in Selma while protesting for civil rights – provoked a sharp response among lawmakers on both sides of the aisle.

Lewis’ Democratic allies leapt quickly to his defense. “@repjohnlewis is a hero and I’m lucky to call him a colleague. You sir are not half the man he is. @realDonaldTrump,” tweeted Rep. Brendan Boyle (D-Penn.). Sen. Kamala Harris (D-Calif.) tweeted: “John Lewis is an icon of the Civil Rights Movement who is fearless in the pursuit of justice and equality. He deserves better than this.”

Ahead of #MLKday2017, let us remember that many have tried to silence @repjohnlewis over the years. All have failed.

John Lewis and his "talk" have changed the world.https://t.co/qeUloAkeTx https://t.co/aH2vDLjKk9

.@realDonaldTrump stands with V. Putin. I stand with @repjohnlewis.

Previous Human Rights Watch: Donald Trump Foments Hatred And Intolerance And Is A Threat To Human Rights
Next Evangelical “Prelates And Prophets” To Create “Shield Of Prayer” Around Donald Trump On Inauguration Day