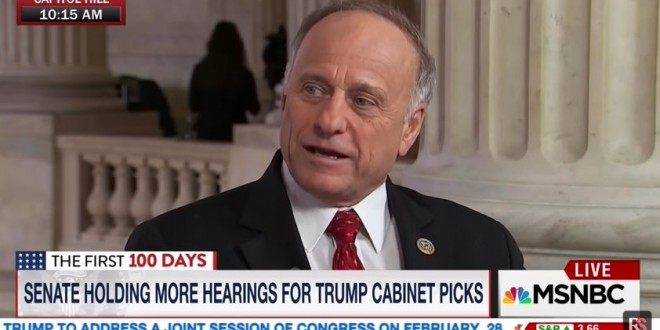 Loony Steve King: I Did The Math On My Calculator And There Were Definitely 2.4 Million Illegal Votes [VIDEO]

Rep. Steve King (R-IA) said on Tuesday that he had personally done an “extrapolation calculation” from two Virginia counties and determined that President Donald Trump had likely lost the popular vote due to 2.4 million “illegal” voters.

During an interview with King on MSNBC, host Hallie Jackson noted that Trump told congressional leaders on Monday that 3 to 5 million people voted illegally, causing him to lose the popular vote. “Let’s be clear, that’s not true,” Jackson pointed out. “There’s no evidence that exists.”

“I hadn’t heard the 3 to 5 [million], I heard the 3 million,” King said. “There is data out there that is sample data from certain counties — two counties in Virginia, for example, and other counties scattered around the country. And I took that article when I first saw it come out a couple of three months ago and did an extrapolation calculation on how many illegals could have or could be voting in the United States.”

“The number I came up with off of that extrapolation was 2.4 million,” the congressman continued. “So, it’s plausible. The number of 3 million sounds like it’s a plausible number to me.”