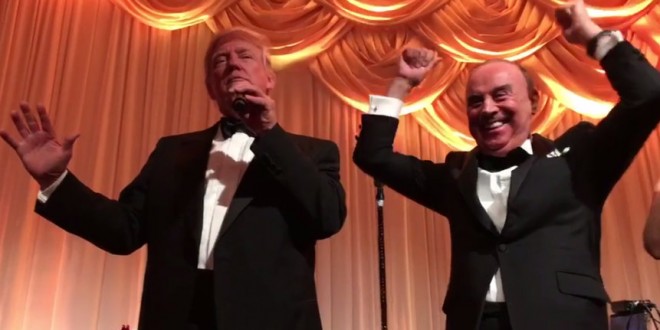 Cinque can be seen in a video obtained by the Palm Beach Daily News, cheering loudly as a tuxedo-clad Trump runs through a number of campaign promises before the hundreds of guests attending the New Year’s Eve bash the President-elect threw at his Mar-a-Lago estate in Florida on Saturday.

“The taxes are coming down, regulations are coming off, we’re going to get rid of Obamacare,” Trump can be heard saying as an exuberant Cinque stands next to him, pumping his fists into the air. Cinque’s Sunday appearance with Trump might raise some eyebrows.

Beyond a 1989 felony conviction for possessing nearly $100,000 worth of stolen artwork, Cinque “used to be friends with John Gotti,” according to a New York Magazine profile from 1995. Cinque was also “shot three times and left for dead” in a 1980 incident that authorities described as “a hit,” according to the profile.

Cinque owns the American Academy of Hospitality Sciences, which apparently exists solely to bestow “Star Diamond” ratings on Trump’s casinos, golf courses, and hotels. For a hefty fee, of course. Trump himself is listed on the company’s website as their “ambassador extraordinaire.”