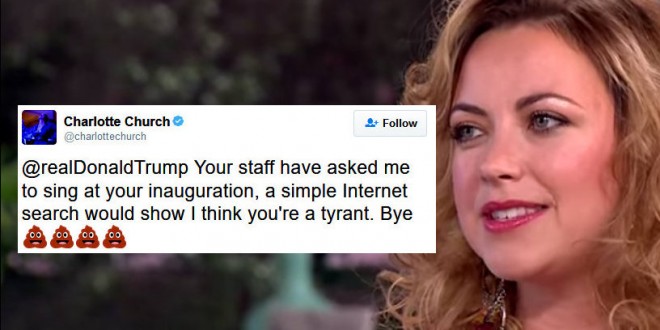 Singer Charlotte Church Blasts Trump’s Inauguration Invite: You Should Have Known I Think You’re A Tyrant

With 10 days to go before Donald Trump’s inauguration, the entertainment roster is still sparse, with only Jackie Evancho, the Rockettes, the Mormon Tabernacle Choir and the Talladega College Marching Tornadoes confirmed to perform. On Tuesday, British singers Rebecca Ferguson and Charlotte Church officially turned him down.

Church, a classical/pop singer from Wales who rose to fame with her version of Andrew Lloyd Webber’s Pie Jesu, tweeted at the president-elect wondering why his inaugural committee had even approached, given that “a simple Internet search would show I think you’re a tyrant.”

Meanwhile, Ferguson, the runner-up from the seventh season of Britain’s The X Factor, said she is officially not participating, given that the committee wouldn’t accommodate her one demand: that she be allowed to sing Billie Holiday’s Strange Fruit. The song is a condemnation of the lynchings of African-Americans in the late 1930s, based on a poem by Abel Meeropol.