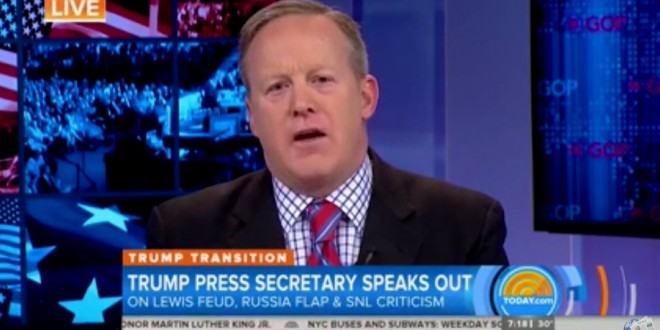 SNL this weekend featured a heavy parodying of the recent Trump press conference, with plenty of jokes about Buzzfeed’s unverified leaked 35-page dossier. In the sketch, a reporter asks Trump (again portrayed by Alec Baldwin) point blank, “I’d like to ask you about your big Russian pee-pee party.”

But Spicer was having none of it, slamming the venerable late night comedy show as “disappointing,” just a day after the President-elect added his own criticism of the show he once proudly hosted.

“It was not funny; it was mean-spirited,” Spicer alleged Monday morning after being prompted to address it by Hall. “And it’s gone from being a show you could sit back and get a good laugh out of to being something that’s frankly mean and bad television,” he continued.

.@NBCNews is bad but Saturday Night Live is the worst of NBC. Not funny, cast is terrible, always a complete hit job. Really bad television!