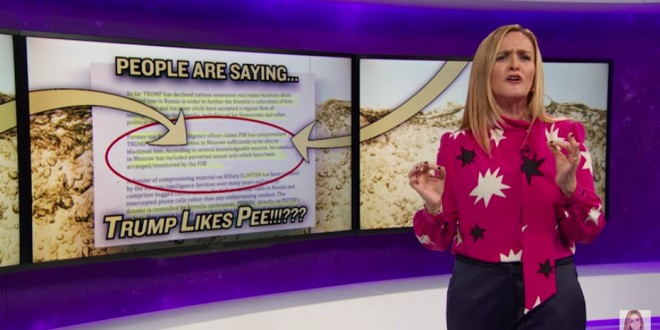 Bee began by talking about President Obama’s emotional farewell speech in Chicago the night before. “Here come the waterworks,” she said. “And speaking of waterworks…” From there, we were off and running on #GoldenShowerGate. “Hallelujah! It’s comedy Christmas!” Bee exclaimed as the words “People are saying… Trump likes pee???!!!” appeared behind her. “Oh bullshit,” she said in response to the unsubstantiated rumors that Trump paid women to urinate on a hotel bed in front of him. “Like we’re supposed to believe Trump has started paying people who do work for him?”

The entire clip is hilarious.

Previous Trump Starts The Day With Yet Another Lie
Next Conway Lies Repeatedly During Heated Exchange On CNN, Anderson Cooper Won’t Have It [VIDEO]