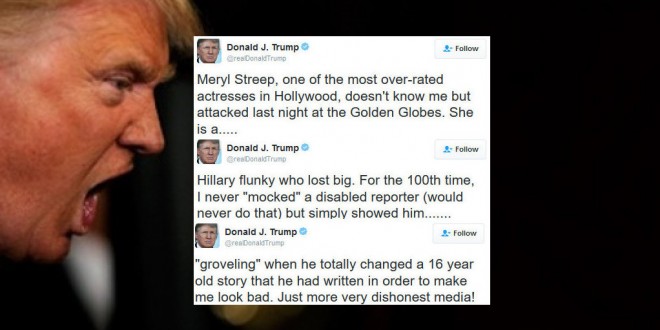 You KNEW he couldn’t resist. Via Politico:

Donald Trump piled onto actress Meryl Streep in a Monday morning flurry of posts to his Twitter account, writing that she is “one of the most over-rated actresses in Hollywood, doesn’t know me but attacked last night at the Golden Globes. She is a Hillary flunky who lost big.” Without mentioning Trump by name, Streep, during her Golden Globes acceptance speech in which she criticized the president-elect as a bully who has shown “the instinct to humiliate,” took particular note of remarks the president-elect delivered in 2015, when he seemingly mocked a New York Times reporter with a disability.

President-elect Donald J. Trump dismissed Meryl Streep as “a Hillary lover” early Monday morning after the actress, in a speech at the Golden Globes award ceremony, denounced him as a bully who disrespected and humiliated others. Mr. Trump, in a brief telephone interview, said he had not seen Ms. Streep’s remarks or other parts of the Globes ceremony, which were broadcast on NBC, but he added that he was “not surprised” that he had come under attack from “liberal movie people.”

Mr. Trump, as he has done many times before, grew heated in the interview as he flatly denied that he had intended to make fun of the Times reporter, Serge F. Kovaleski. “I was never mocking anyone,” Mr. Trump said. “I was calling into question a reporter who had gotten nervous because he had changed his story,” arguing that the reporter had been trying to back away from an article he wrote in September 2001 about the terrorist attacks on the World Trade Center and elsewhere that month.

“People keep saying I intended to mock the reporter’s disability, as if Meryl Streep and others could read my mind, and I did no such thing,” he said in the interview.

Remember, the reason Trump mocked a disabled reporter was because he didn’t support the “Muslims cheered 9/11” lie https://t.co/OTjRdv55Ei pic.twitter.com/ZksQN3JBid