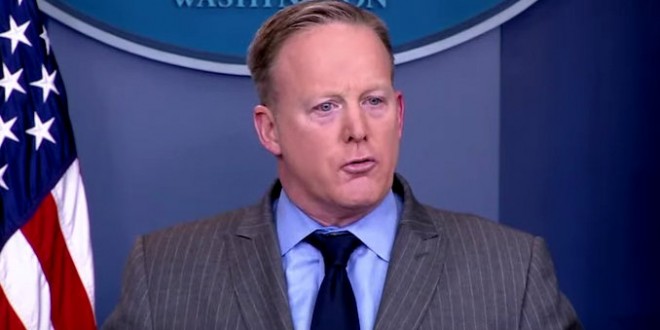 A White House source tells Axios that despite only days on the job, Donald Trump‘s senior staff is already looking for someone to replace press secretary Sean Spicer. Politico Playbook alum Mike Allen writes, “This West Wing is a tough neighborhood. Even AFTER Sean Spicer’s successful get-back-on-the-horse presser yesterday, I’m told that a top White House official was discussing his possible replacement. On Day 4!”

He continues, reporting that Trump himself is displeased with Spicer for reasons completely divorced from his argumentative skills. “Unfortunately for Spicer, Trump is obsessed with his press secretary’s performance art. Our Jonathan Swan hears that Trump hasn’t been impressed with how Spicer dresses, once asking an aide: ‘Doesn’t the guy own a dark suit?’”

Over the objections of his aides and advisers — who urged him to focus on policy and the broader goals of his presidency — the new president issued a decree: He wanted a fiery public response, and he wanted it to come from his press secretary.

Spicer’s resulting statement — delivered in an extended shout and brimming with falsehoods — underscores the extent to which the turbulence and competing factions that were a hallmark of Trump’s campaign have been transported to the White House.

By most standards, Spicer’s statement Saturday did not go well. He appeared tired and nervous in an ill-fitting gray pinstripe suit. He publicly gave faulty facts and figures — which he said were provided to him by the Presidential Inaugural Committee — that prompted a new round of media scrutiny.

Many critics thought Spicer went too far and compromised his integrity. But in Trump’s mind, Spicer’s attack on the news media was not forceful enough. The president was also bothered that the spokesman read, at times haltingly, from a printed statement.