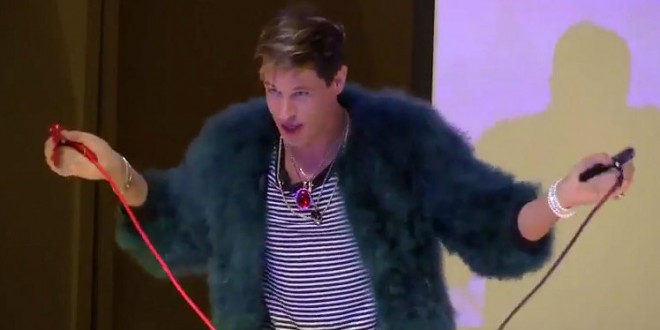 The man who told police he shot and wounded another man during a violent demonstration over the appearance of Milo Yiannopoulos at the University of Washington sent a social-media message to the Breitbart News editor just an hour before the shooting.

“Hey Milo,” the 29-year-old former UW student posted to Yiannopoulos’ Facebook page at 7:24 p.m. “im outside in line to your UW event. “I got sucker punched (he was a bit limp wristed) and someone jacked my #MAGA hat,” he said, referring to the ubiquitous red and white “Make America Great Again” caps worn by supporters of President Trump.

“Anyway for me to get a replacement signed by you?” the man asked. Yiannopoulos did not respond, and the man went on to be caught up in a raucous confrontation between those trying to get inside the UW’s Kane Hall to see Yiannopoulos and protesters trying to keep them out.

Sometime just before 8:30 p.m., the man — who at this point was wearing a yellow hat — was involved in a scuffle with several people, and he allegedly shot and wounded the other man.

A law-enforcement source familiar with the UW police investigation said detectives obtained a search warrant for the man’s car and Sunday recovered a handgun from the trunk. The man’s Facebook page indicates he is a supporter of Trump, Yiannopoulos and the National Rifle Association.

Right wing sites continue to claim that the shooter, who has still not been charged, was a “leftist thug.” A crowd-funding drive for the victim’s medical expenses has raised over $45K at this writing.

Previous LYING LIARS WHO WON’T STOP LYING: Sean Spicer Doubles Down On Trump’s Voter Fraud Claims [VIDEO]
Next Loony Steve King: I Did The Math On My Calculator And There Were Definitely 2.4 Million Illegal Votes [VIDEO]