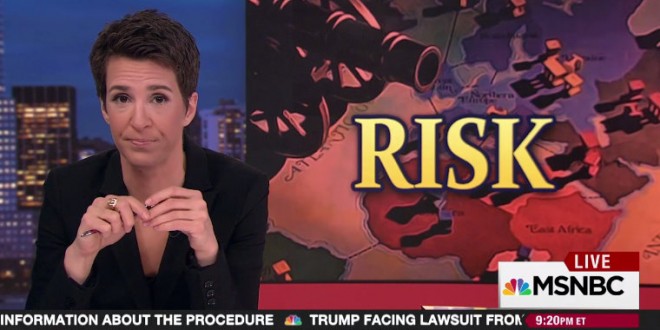 Rachel Maddow: Trump Has Endangered US Troops With His “We’ll Take Their Oil” Comments [VIDEO]

Last night Rachel Maddow devoted the opening of her show to Trump’s appearance at CIA headquarters when he said this:

“If we kept the oil [in Iraq], we wouldn’t have had ISIS in the first place. The old expression, to the victor belong the spoil. We should’ve kept the oil. But, okay, maybe we’ll have another chance.”

Notwithstanding the seeming offer to start another war in the Middle East, a clearly flabbergasted Maddow responded:

“Every moment that statement stands puts our troops at greater risk. That’s our American policy now? We’re gonna take your oil? Until the new administration fixes this, they have created a daily clear and present big new danger for every American who is serving in an oil-producing country abroad. As if their mission wasn’t dangerous enough already.”