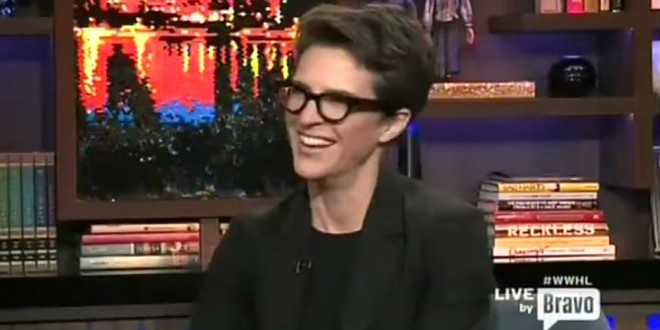 MSNBC’s Rachel Maddow joked Wednesday that if President-elect Donald Trump were to appear on her show, her first question would be whether she will be sent “to a camp.” Maddow — host of “The Rachel Maddow Show,” MSNBC’s highest-rated program — was a guest on Bravo’s “Watch What Happens Live With Andy Cohen.”

“If you booked Donald Trump on your show, what would your first question be?” Cohen asked Maddow, reading a viewer question. After a pause, Maddow deadpanned: “Are you going to send me or anybody that I know to a camp?” An amused Cohen quickly changed the topic and moved on.

Some right wing sites are reporting the exchange without highlighting that Maddow was clearly joking.