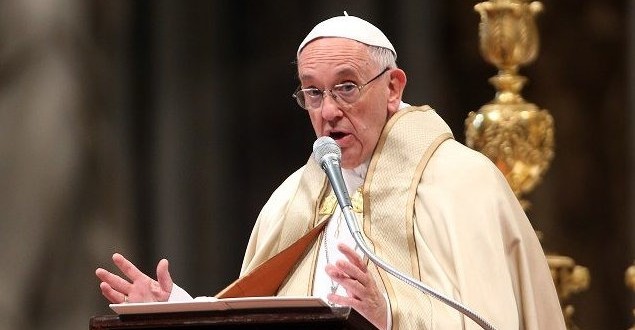 Pope Francis warned against populism, saying it could lead to the election of “saviours” like Hitler. In an hour-long interview with Spanish newspaper El Pais conducted as Donald Trump was being sworn in as US president, the pontiff also condemned the idea of using walls and barbed wire to keep out foreigners.

“Of course crises provoke fears and worries,” he said but added that for him “the example of populism in the European sense of the word is Germany in 1933. “Germany… was looking for a leader, someone who would give her back her identity and there was a little man named Adolf Hitler who said ‘I can do it’.”

“Hitler did not steal power,” the pope said. “He was elected by his people and then he destroyed his people.” The Germans at that time also wanted to protect themselves with “walls and barbed wire so that others cannot take away their identity,” he said.

The Pope went on to declare that it’s too early to make any such judgments about Trump. InfoWars, as you can see, didn’t take that comment very well.

Previous Women’s March Drew Three Times As Many As Trump’s Inauguration, Second-Highest Metro Ridership Ever
Next Conway: Trump Will Never Release His Tax Returns, People Voted For Him And They Just Don’t Care [VIDEO]