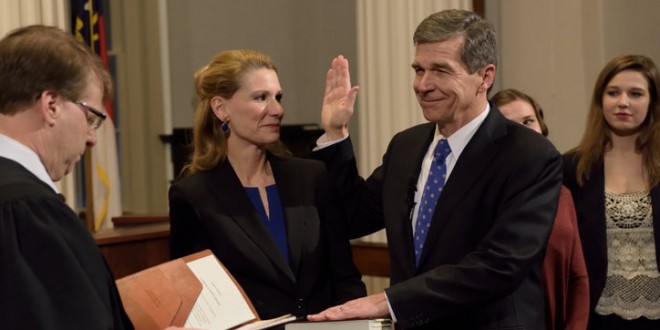 NORTH CAROLINA: Roy Cooper Sworn In As McCrory Blames Media And HB2 For His Loss [VIDEO]

North Carolina Gov. Roy Cooper took his oath of office minutes after midnight Sunday morning, getting an early start on his duties amid bitter partisan politics in the state but saying he believed there is a way forward.

Joined by a small group of family, friends and colleagues, the Democrat was sworn inside the old House chamber of the 1840 Capitol building nearly a week before his public inauguration.

A Cooper aide has said the state’s 75th governor wanted to get started on gubernatorial duties following a transition period shortened by a protracted debate over vote-counting in his close race with outgoing Republican Gov. Pat McCrory.

“I’m aware of the solemn responsibility that I’ve been given and the duty that I have to uphold the Constitution,” Cooper said shortly after state Chief Justice Mark Martin administered the oath to Cooper during the 15-minute ceremony. “I cannot wait to get started.”

Gov. Pat McCrory wrapped up his 4-year term Saturday with a 15-minute video message in which he touted his administration’s accomplishments and slammed House Bill 2 opponents, the ACC’s boycott of North Carolina and the news media.

Saturday was McCrory’s final day in office after losing his re-election bid to Democrat Roy Cooper. Cooper was sworn in shortly after the new year begins at midnight – the earliest time he can legally take the oath of office.

On Saturday morning, he posted a YouTube video in which he boasted that his “accomplishments are greater than any administration during the past 25 years, and it wasn’t because of me, it was because of the team I put together around me.”

But McCrory also took parting shots at his critics, particularly those who opposed him over House Bill 2, the controversial LGBT law that struck down local nondiscrimination ordinances and requires transgender people in government facilities to use the bathroom that corresponds to the gender on their birth certificates.

He said HB2 likely played a major role in his election defeat, and he blamed the Charlotte City Council – which passed a nondiscrimination ordinance that prompted HB2 – as well as the LGBT advocacy groups that backed economic boycotts of the state. He called it a “manufactured crisis.”