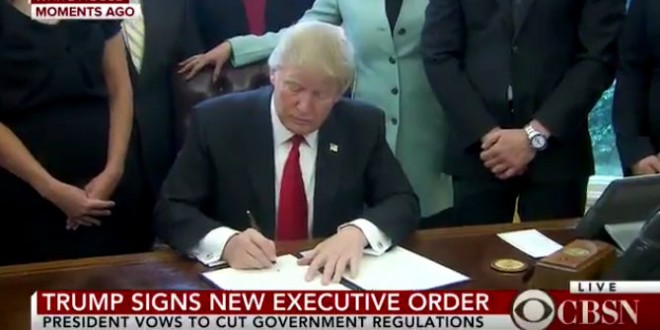 New Trump Executive Order: For Every New Federal Regulation, Two Old Ones Must Be Rescinded [VIDEO]

President Donald Trump signed an executive order Monday morning requiring that for every new federal regulation implemented, two must be rescinded. “This will be the biggest such act that our country has ever seen,” Trump declared moments before signing it inside the Oval Office. “There will be regulation, there will be control, but it will be a normalized control where you can open your business and expand your business very easily. And that’s what our country has been all about.”

The executive order signing, which fills a campaign pledge, comes after the president held a listening session with small-business leaders. “If you have a regulation you want, number one, we’re not gonna approve it because it’s already been approved probably in 17 different forms,” Trump said. “But if we do, the only way you have a chance is we have to knock out two regulations for every new regulation. So if there’s a new regulation, they have to knock out two.”