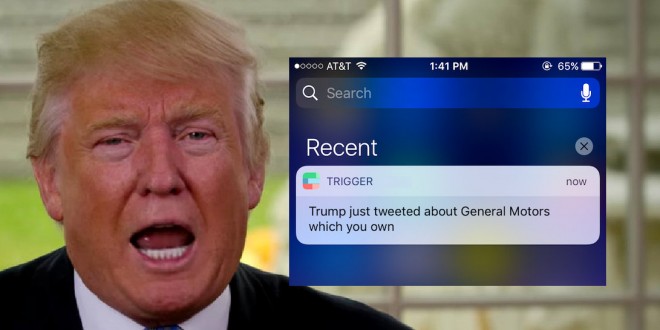 From the makers of the smartphone app Trigger:

We are excited to announce the release of our latest trigger type: Trump Triggers! This trigger gives you the ability to trade stocks based off of Trump’s tweets about public companies. This one-of-a-kind trigger notifies you when President-Elect Trump tweets about a publicly traded stock that you own in real time. These triggers can help you capture moves or manage your holdings based on the market’s reaction to the future President’s remarks.

While it’s no surprise that Trump has been actively tweeting since the election, no one anticipated that a single tweet could potentially eradicate billions of dollars in market cap from large companies. His tweets on prices and contracts with public companies have had significant market moving events that make it more difficult for the everyday investor to stay on top of their investments.

This increased political “tweet” risk is familiar to professional investors and hedge funds on Wall Street, which have traders 24/7, smart algorithms and models to account for this tweeting risk. However, individual investors do not have the appropriate tools to react in an automatic fashion, until now, with Trigger.

Trump’s tendency to target specific companies in tweets has taken a toll on several publicly traded stocks. Stock prices for Boeing, Lockheed Martin, General Motors and Ford all took deep dives after the president-elect’s barbs on Twitter. Wall Street firms and traders have since adapted to Trump’s impact on the market, writing algorithms and setting up early morning and late-night monitoring of the president-elect’s social media account. California-based tech companies have also shifted employees’ schedules so someone is awake at 3 a.m. local time, late enough to catch early morning tweets from Trump, who has been based in New York.