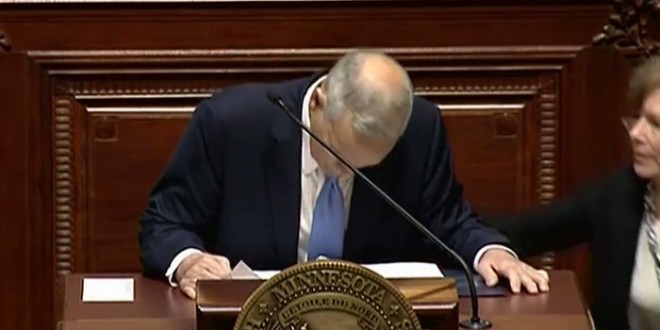 Minnesota Gov. Mark Dayton collapsed while delivering the State of the State address on Monday, striking his head on a lectern. The 69-year-old Democrat appeared to be conscious as he was helped into a back room several minutes later, and a top staffer said he walked out of the Capitol on his own and was spending time with his son and grandson after a routine check by emergency medical technicians at his home.

House Speaker Kurt Daudt said minutes after the incident that Dayton was “up and about” and that the governor would be all right. Sen. Dan Schoen, who is also a paramedic, was among those who went to Dayton’s aid; he said Dayton was acting normally within 20 minutes of the collapse and poking fun at himself.

Nearing his 70th birthday on Thursday, Dayton has a history of health problems. Dayton was hospitalized in February 2016 after he fainted at a hot and crowded event. His office said at the time that he had been feeling pressure in his lower back – he had undergone elective back surgery the previous December – before he lost consciousness. Dayton spent just a day in the hospital, and said afterward he had been treated for dehydration.

In addition, a series of back and hip surgeries in recent years has left him with a permanent limp. The governor fell about three-fourths of the way through his speech as he laid out the opening salvo in a brewing battle with Republican legislative majorities over where to bring the state after November’s elections, including his proposal for a state-run public health care option for all Minnesota residents.

Trump fans are pouring into the comments at the clip below to viciously mock Dayton’s collapse. Of course.