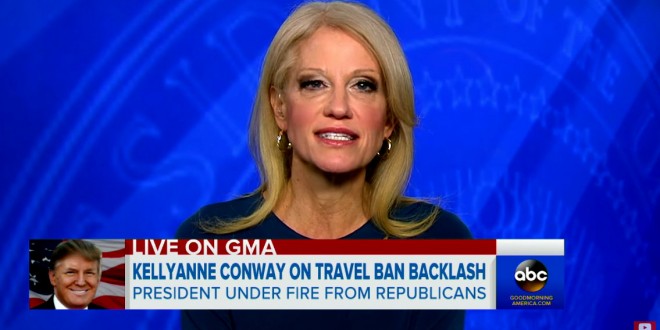 Minister Of Propaganda Kellyanne Conway battled George Stephanopoulos this morning over Trump’s tweeted claim that Lindsey Graham and John McCain want to start World War III. As she always does, Conway bobbed and weaved and shouted “SQUIRREL!” at every opportunity. Here’s a recap:

“Kellyanne, these are Republican Senators!” Stephanopoulos shot back. Again, she invoked the beginning of Trump Tweets instead of addressing the subject at hand. She also seemed to take a slight swipe at Graham and McCain at one point by indicating that both men have run for the office of the President before unsuccessfully.

“Kellyanne, it’s really just a yes or no question,” Stephanopoulos attempted one final time in the closing seconds of the interview. “Does the President believe those two Senators are looking to start World War III?” Anyone hoping that the former campaign manager would actually answer the question was left sorely disappointed.

“You can read his Tweet. But read the full Tweet, don’t cherry-pick it the way the media likes to do these days,” she replied. “We want to work with all the Senators,” she continued, invoking Vice President Mike Pence in her long filibustering response aimed purely at killing the final moments of the interview without facing a fourth follow-up.

Previous New Trump Executive Order: For Every New Federal Regulation, Two Old Ones Must Be Rescinded [VIDEO]
Next Loony Tune David Barton: I Have Fewer Rights Than Others Because I’m A White Christian Male [AUDIO]