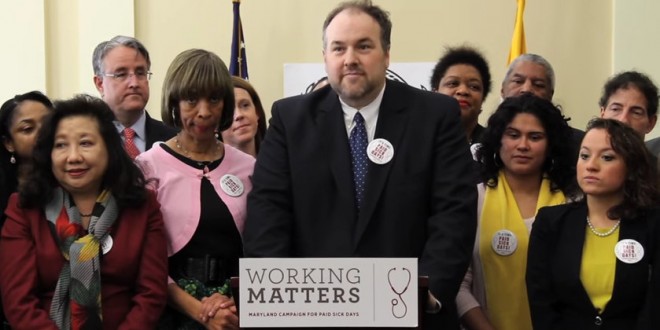 A Maryland delegate spoke in personal terms on Monday night as he joined advocates and supporters of a bill that would require companies to provide paid sick leave to their employees. Del. Luke H. Clippinger (D-Baltimore) shared for the first time publicly that he was diagnosed in June with a rare form of leukemia. Two weeks ago, he learned that the cancer is in remission.

Clippinger, an assistant state’s attorney in Anne Arundel County, told the the group gathered for the rally in Annapolis that Marylanders should be able to focus on improving their health, not worrying about losing their pay.

“I could focus on what mattered: getting better, being with my family,” Clippinger said, noting that his job told him to take all the time he needed. “If sick leave is good enough for me, it’s good enough for 700,000 Marylanders. It represents our values. This is who we are. This reflects the state we want to live in. It’s a state where we know that the burdens of illness shouldn’t be compounded by the burdens of poverty.”

Last year Clippinger’s paid sick leave bill was approved by the House, but stalled in the state Senate. He is trying again in the current session.

NOTE: Clippinger is a longtime JMG reader. When I first met him in person, he joked that he’s the Maryland legislature’s “one-man bear caucus.” The photo of us below is from 2015.