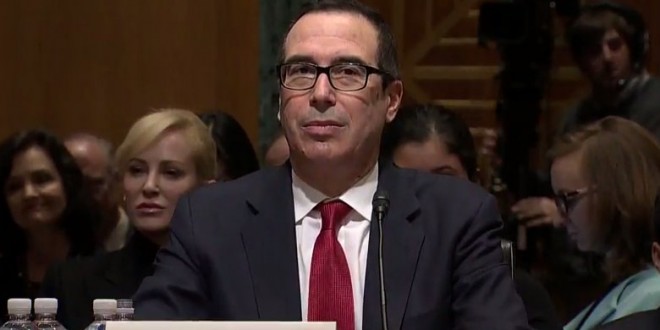 The Guardian reports on what to expect:

Mnuchin made much of his fortune by capitalising on the housing crisis. In 2008 Mnuchin and his partners took over IndyMac, a Californian bank that had been felled by its risky lending practices in the financial crisis and taken over by the government.

Mnuchin told the Wall Street Journal last year he was proud that they had “turned around a huge economic disaster”. But his critics are less impressed. OneWorld foreclosed on some 36,000 people including a 90-year-old woman who had made a 27-cent payment error. The bank was the target of government inquiries as well as consumer activists.

Senator Elizabeth Warren has called Mnuchin “the Forrest Gump of the financial crisis” and said he “managed to participate in all the worst practices on Wall Street”. His appointment, said Warren, was proof that Trump “has no intention of draining the swamp and every intention of running Washington to benefit himself and his rich buddies”.