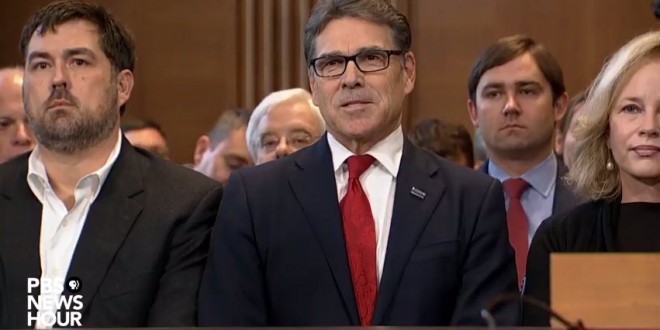 NPR reports on what to expect:

Nuclear security is an area where Perry is likely to get questioned by senators, since he has had little experience with the topic. “DOE is fundamentally a science, technology and innovation organization,” wrote current Secretary of Energy Ernest Moniz in his Cabinet exit memo. Moniz is a nuclear physicist and his predecessor, Steven Chu, was a physicist. Chu shared with several colleagues the 1997 Nobel Prize in Physics.

Perry does not have a science background. It’s not a requirement — previous secretaries who were not scientists have served in the role. Delisi says the way Perry manages will compensate for his lack of scientific knowledge. “His leadership style is to hire the best people and have them around him. And listen to all points of view and take them in before he makes a decision,” she says.

But that doesn’t satisfy Perry’s critics. As a presidential candidate, Perry has questioned the science behind climate change. At one point he accused scientists of manipulating global warming data for financial gain.