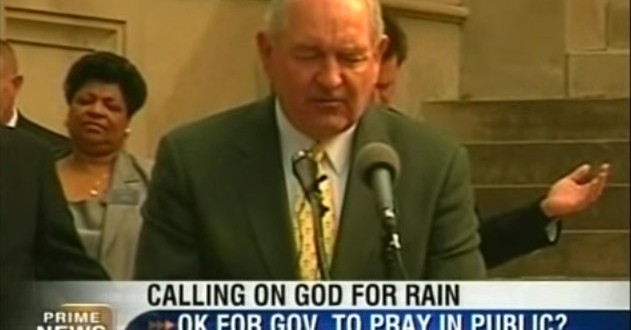 After selecting a cabinet dominated by conservative white men with poor records on civil rights and a history of climate science denial, it appears Donald Trump may fill one of the few remaining slots with a conservative white man with a poor record on civil rights and a climate approach that is anything but scientific. According to Politico, his leading candidate for Secretary of Agriculture is Republican former Georgia Gov. Sonny Perdue.

Perdue, whose first cousin is current U.S. Senator David Perdue (also R-GA), was elected in 2002 after promising angry voters a referendum on whether to reinstate the Confederate battle cross as the state flag (it had been replaced by Democratic Gov. Roy Barnes in 2001 by a new flag with a much smaller Confederate icon). As Governor, Perdue delighted neo-Confederates by signing legislation permanently making April “Confederate History and Heritage Month” in the Peach State and issued proclamations that honored “the more than 90,000 brave men and women who served the Confederate States of America,” and falsely suggested that “many African-Americans both free and slave” voluntarily served in the Confederate armed forces.

The Associated Press reported in 2007:

Georgia Gov. Sonny Perdue stepped up to a podium outside the state Capitol on Tuesday and led a solemn crowd of several hundred people in a prayer for rain on his drought-stricken state. “We’ve come together here simply for one reason and one reason only: To very reverently and respectfully pray up a storm,” Perdue said after a choir provided a hymn.

Georgia and its neighboring states are caught in an epic drought that threatens public water supplies. Perdue has ordered water restrictions, launched a legal battle against the release of water from federal reservoirs and appealed to President Bush.

“It’s time to appeal to Him who can and will make a difference,” Perdue told the crowd. The hourlong event was billed as an interfaith ceremony but only three Protestant ministers joined Perdue, who is a Baptist, and Lt. Gov. Casey Cagle.

Previous Trump Flack Sean Spicer Blows Up At CNN Host’s “Unbelievable” Questions About Russian Hacking
Next British Singer On Inauguration Invite: I’ll Only Do It If I Can Perform Protest Song About Lynching Blacks